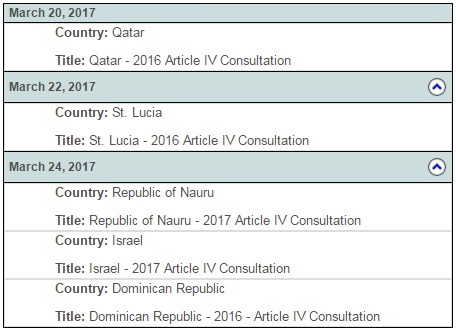 Официальных комментарий от МВФ пока нет. Но, внимательное прочтение стенограммы вышеупомянутого брифинга, дает повод задуматься. Журналисты задали всего несколько вопросов, но весьма тяжелых для МВФ.
QUESTIONER: Do we have a date for the board on Ukraine? Because I understand the Ukrainian finance minister was here, so if you could give us any idea of what was accomplished with him would be helpful.

MR. RICE: Yes. The finance minister, Danylyuk, visited the Fund this week during his trip to the U.S., and actually, he met with David Lipton our First Deputy Managing Director and staff for discussions on policies going forward.

The board meeting has been scheduled for March 20. Okay?

QUESTIONER: You know, it’s a broad question that I think underlies everything that you basically do or needs to underlie everything that you need to do. This past Sunday I donated some clothes to my local church, and it turned out that they were sending out those clothes to Ukraine. And they said there is a dire need in that country, so giving that sort of help.

And what surprised me the most is they specifically cited tariffs, and how do you mean? Like, they say the tariffs have become so high for energy, for energy, basically. That people cannot afford food and clothing. And I said, you know what? Next time I go to the IMF I’ll let them know that you said so unprovoked, and I’ll ask you, are you aware of that situation? What can be done? Is this situation somehow envisioned with your plans with Ukraine? The new ones that you just discussed with Danylyuk? And what’s in store for the Ukrainians in terms of those tariffs going forward and in terms of their pensions? Thank you.

MR. RICE: Yes. We are absolutely acutely aware of the challenges facing Ukraine and the Ukrainian people, and, indeed, that’s why the Fund has gone to, I think, such extensive efforts in terms of its support to Ukraine. I think you know that. That we have approved a $17.5 billion facility for Ukraine in the recent period.

And I think the good news was last weekend when we were able to announce that the IMF staff and the authorities have agreed on the third review of the program. So in terms of, if you look at the history of IMF support for Ukraine, I think this is as far as we have ever come in terms of progress in programs with Ukraine.

QUESTIONER: Lastly, the same lady, the same woman I was talking to said you know what in terms of the -- when I mentioned the IMF. She said, you know what? We’ve made some calculations. I don't know whether they did it themselves. They probably -- she picked out, picked it up somewhere in the press, I’m sure. But, apparently, in Ukraine people are making a calculation between the amount of money provided by the IMF under the program that you described and the amount of newly found riches that the deputies, parliament deputies, are declaring now in their income declarations, tax declarations.

Again, if it’s a real problem, if it’s a perception problem I have no way of knowing. But I think you need to know that at the IMF.

MR. RICE: Well, I take that very seriously, and we do at the IMF. But, you know, the IMF has stringent guidelines and safeguards on how IMF funds are used and very carefully tracked. And, you know, the IMF’s been doing this for more than 70 years, and I think the record in terms of the governance of IMF funds and financing is very strong. And that’s something we are vigilant on an ongoing basis.

Transcript of a Press Briefing with Gerry Rice, Director of the IMF Communications Department and IMF Spokesman

Posts from This Journal “украина” Tag